/storeJoe says, "Every plant and animal living in the natural world around us is part of 'nature's team'. Each has its own responsibilities. The combined effort of all is what made  the Earth and keeps the Earth nourished and in turn, provides us with a planet that we human beings can live on. Our responsibility as humans should be to learn as much as we can about this master plan. We will know better how to cooperate with the web of life. Remember it takes team work to make things work. Not only does life become more enjoyable as we understand more about it but we can also insure a healthy planet Earth for our children and future generations.

I produced this video field guide for educational purposes and for the personal safety and peace of mind of my fellow human beings. But more importantly for the Earth itself.

All snakes, including the venomous, are members of nature's team. As good team members they have work to do. And whether we like them or not nature needs them and the job that they are doing for this earth.

All snakes and especially the non- venomous should b e left alone.   If the snake we see is not one of the venomous species it should be allowed to go about its business. It poses no threat whatsoever to us our child our dog or our cat.

This video teaches easy methods of recognizing the few venomous snakes of North America. It is the first, the best and the only video of its kind." 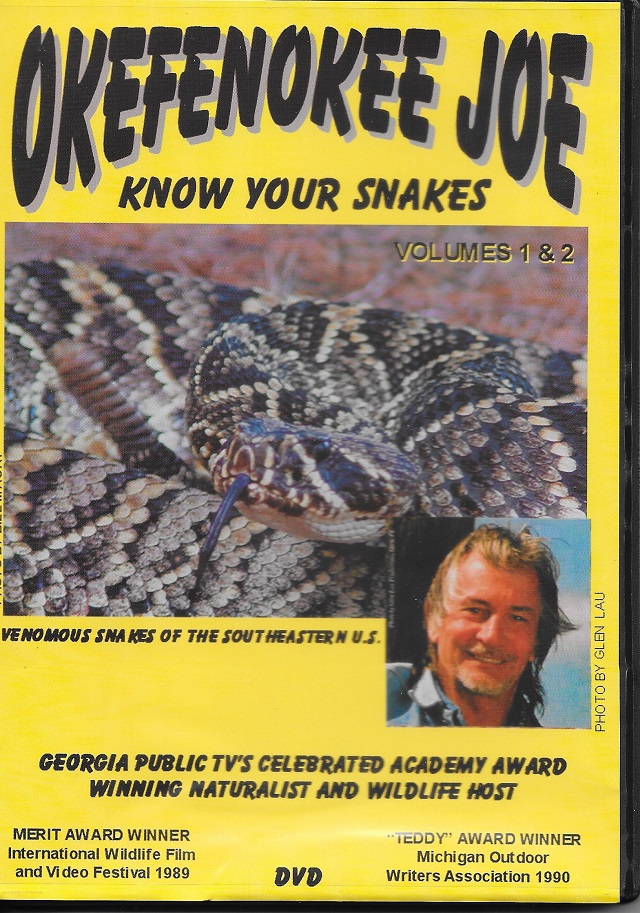 Title: Know Your Snakes
Volumes I and II (both on same disc)
Written and narrated by
Okefenokee Joe

To order go to the Swamp Store

Here are a few tips that will help to identify the venomous snakes of North America:

The first three snakes listed here are collectively known as Pit Vipers.  Midway between the pit viper's eyes and its nostrils on either side of its face is a deep pit.  It is actually a heat sensing device which aids the snake mainly in its search of prey.  All pit vipers have vertically elliptical pupils. Which means their eyes are not round.  They look like slits straight up and down.  All of our non-venomous snakes have big round eyes.  For more detailed information about snakes see Joe's new book "Snake Hunter Snake Talk"

The Copperhead - Sometimes called a "Highland Moccasin". Easily recognized by dark brown "hour glass" shaped bands on its back. Five known species in the U. S., all similar in appearance.

The Cottonmouth - also known as a "Water Moccasin". Heavy bodied snake. Prefers to live near water. Three known species in the U. S., all similar in appearance.

The Rattlesnake - Usually a heavy bodied snake, and on its tail is a set of rattles.  The rattles are made of material similar to the texture of our finger nails.  When the snake shakes its tail the segments of the rattle click together to make a shrill sound that can be heard many yards away. There are approximately thirty-one known species of rattlesnakes residing in the U.S.

Coral Snake - It is not a pit viper.  It is a member of the Cobra Family.  Therefore it has no facial pits. But it does have vertically elliptical pupils.  Striking colors of red, black and yellow. Its bands encircle its entire body which means its belly is just as beautiful as its back.  Positive ID: Yellow band separates every color, black nose, and red bands disappear towards the tail. Three known species in the U. S., all similar in appearance.

You will find more help in identifying snakes in the book described below.  It gives all the positive ID of all the snakes of Georgia and South Carolina.  It also describes their habitat, and provides range maps showing where they are found.  It contains more vital information than most much more expensive books on snakes, and its on sale in our store.

"The Snakes of Georgia and South Carolina"
Buy it in the Swamp Store  Only $10.00 Plus free shipping.

To order go to our Swamp Store